While this has been the best season of Tim O’Connell’s career so far, he is already looking forward to the 2018 rodeo year and making plans for it.

The Zwingle, Iowa, native has lead the world standings for most of the year, broken his own regular season earnings record and right now the world title is his to lose. And even though he has had a lot of big wins, it hasn’t been without trials as well.

He’s gotten to check rodeos off his bucket list, like Wyoming’s Cheyenne Frontier Days, a rodeo that he has dreamed of winning since he was a little kid. But just a week later, a bad landing at Sikeston, Missouri saw him struggling with his hips and having to spend 10 days in August at home.

That 10-days off was difficult, not as much because he wasn’t getting on bucking horses and doing what he loved, but more because he couldn’t even workout. His hips were out of alignment and everything he did made them worse. So he regrouped, went to the physical trainers at his alma mater Missouri Valley College and rested.

“That was tough,” Tim said. “I was happy to be home and I got some things done around the house, but I’m used to being busy and working. I got taken out of my own element. I couldn’t lift anything or do anything strenuous or my hips would pop back out.”

After that brief respite from the rodeo trail, he came back at four rodeos, won Kennewick, Washington, tied for the win at Tremonton, Utah, and placing at Rapid City, South Dakota and San Juan Capistrano, California.

Once again, his lead in the world standings was increasing, but in his efforts to plan for the future, he decided to skip the Labor Day rodeos in the Northwest and work towards his fourth RAM National Circuit Finals Rodeo qualification.

“All of the money that is available at those circuit rodeos doesn’t add up to what Ellensburg and Walla Walla pay,” Tim said. “But, with the Circuit Finals counting towards the standings, I have to think about that.”

“Last year, I had nearly $8,000 won before I got to Denver (in January) because the (Great Lakes) circuit finals money counted. That gave me a good jump on the season,” he said. “I try to look forward, look at my future and think about what my plans and goals are.”

His plans and goals aren’t the only thing that he considers when planning his schedule. He is also thinking about his traveling partners and because of that he will finish the season strong. Shane O’Connell, who is not related, has been traveling with Tim most of the year. The Rapid City, South Dakota, resident is currently 20th in the world standings.

The nature of the rodeo trail forges relationships between traveling partners that often includes them as extended members of each other’s families. And having one of his traveling partners at the NFR would be exciting. Tim did get some news in August that his older brother, Will, could be there this year as well.

Will was one of five pick-up men nominated for the 2017 PRCA Pickup Man of the Year. While that has no bearing on who is selected as pickup men for Las Vegas, the family is thrilled.

“It is so awesome,” Tim said. “My brother got my dad’s side of the genes. My dad was a great pickup man and my brother is too. They are both great horseman. When it comes to riding a broke horse, I didn’t get any of that.” 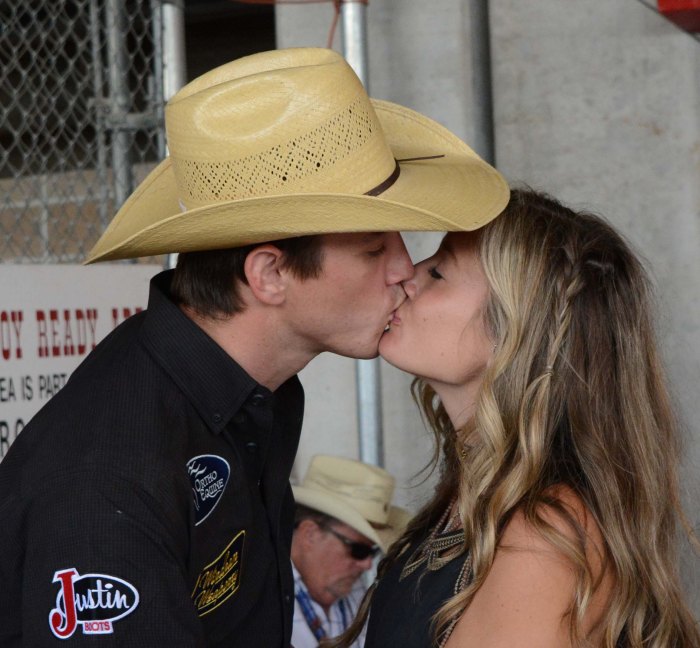 Tim and Sami share a celebratory kiss after he won the title at the “Daddy of ‘em All.”

The O’Connells have had a lot to smile about this year. One of the biggest wins of Tim’s career came in Wyoming in July at the legendary “Daddy of ‘em All,” Cheyenne Frontier Days. The win was even more special because Tim’s wife Sami was on hand to see him earn the championship.

“I’ve knocked quite a few rodeos off my bucket list this year,” Tim said. “To have Cheyenne be one of them is pretty humbling. Having Sami there made the win that much better. She would have been the first person I would have called. The only thing better would have been if the rest of the family had been there too.”

Family is central to all of Tim O’Connell’s plans. He always looks forward to Cheyenne Frontier Days as his wife Sami gets to join him there.

That family is going to be growing. Tim’s future now includes a baby due in March. And next year when Sami makes the trip to Cheyenne to watch him defend his title there, she will be pushing a stroller and adding to Tim’s already growing fan base. 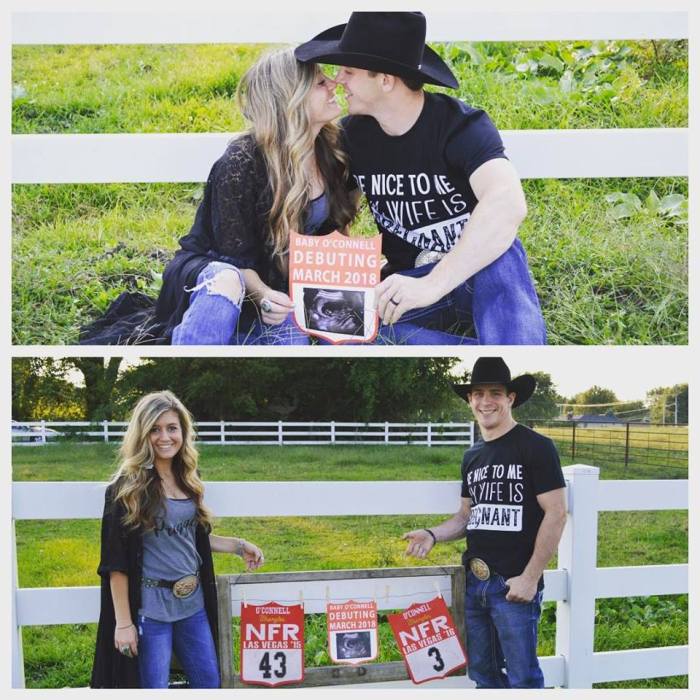 Next March, the O’Connell’s lives will change forever with the addition of a new family member.