World championships in this sport don’t come easy. Along with physical demands, there are hours spent traveling, time spent away from loved ones and financial risks that can take their toll.

And, along the way, a Wrangler National Finals Rodeo (NFR) qualification is required. Since the NFR purse increased in 2015, each of the 120 contestants has had an opportunity. The gap from 1st to 15th can decrease in a hurry when you are riding for $26,000 a night.

Last year, there were two contestants that entered the NFR leading a single event in the world standings that left with a gold buckle – Tim O’Connell and Sage Kimzey. The biggest move came in the saddle bronc riding where Ryder Wright came to Las Vegas in eighth place and left with the gold buckle.

Tim and Sage – Tim O’Connell and Sage Kimzey were the only contestants to enter the NFR in first place in their event standings and leave with gold buckles, Tim’s second consecutive and Sage’s fourth. Left to right, Tim, his wife Sami, Alexis Bloomer and Sage.

After winning his first gold buckle, Tim found himself asking, “What’s next?” He reevaluated goals, talked to mentors and coaches and laid the foundation for his future. He is working towards one of those goals one gold buckle at a time.

World title number two came with the knowledge that he is utilizing his God-given gifts and that there is always more to do, opportunities to get better and higher standards to set. But, with his first child on the way, some of those goals changed, and so did his focus.

Tim and his wife Sami welcomed Hazen Jeffery O’Connell into this world on March 2nd. His arrival had been planned for, anticipated and calculated. Sami was by Tim’s side throughout last year’s NFR with an ever-growing baby boy just waiting to come out spurring. Her due date was in March and Tim was planning his rodeo schedule to be home for Hazen’s birth. 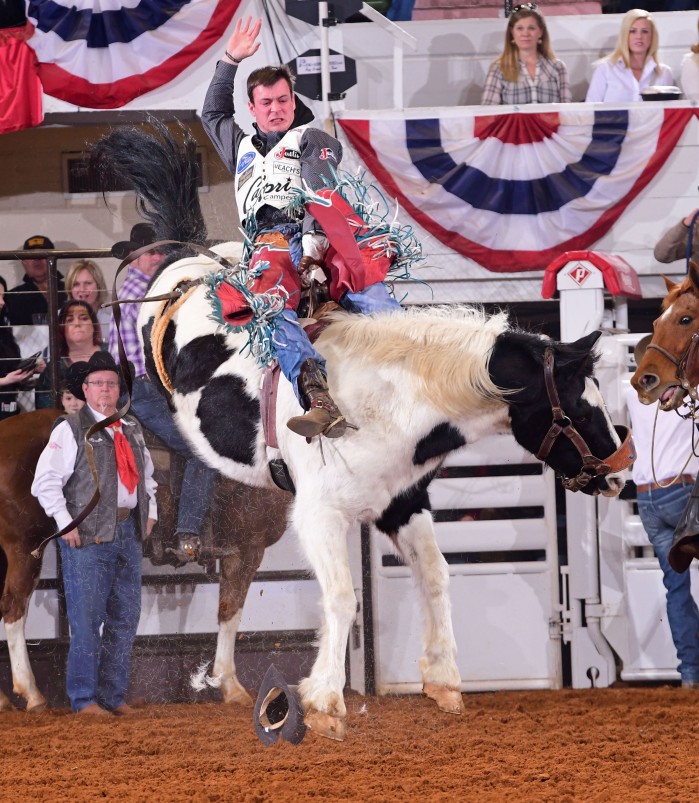 Tim at Fort Worth – This 86-point ride on Picket Rodeo’s Night Crawley helped Tim to a 4th place finish at the Fort Worth Stock Show & Rodeo in February. PRCA photo by James Phifer

He went to Denver in January and Fort Worth in February, rodeos that he had won twice and was the champion at in 2017. He finished seventh at Denver and fourth at Fort Worth and even though he wasn’t the champion at either rodeo still managed to earn $8,534 out of two of the big-building rodeos of the 2018 season. 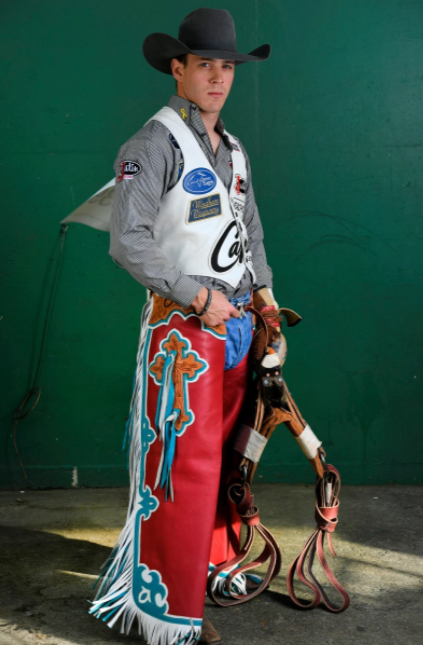 In between rodeos, he was busy at home getting the nursery ready, preparing for Hazen’s arrival, and keeping up with workouts. Next up was San Antonio where he competed in the first bracket February 8 – 10. The San Antonio Rodeo’s competition format has five brackets with 10 contestants in each of the seven standard rodeo events. They ride for three consecutive rounds and the four with the highest total earnings advance to the semifinals.

Tim won $3,022 in his bracket, flew home for few days, then back to the Semifinals Feb. 22 & 23rd. He had two more horses to get on and money to earn to advance to the finals and have a chance to win a San Antonio buckle. All the while, Sami and Hazen were first and foremost on his mind.

A family friend, who is a pilot, was on standby in Dallas. Every time Tim’s phone rang and Sami’s name showed up on caller ID, he wondered if this was it. Her due date was getting closer. They knew that she could go into labor at any time and Tim was doing everything possible to plan for the unforeseen. Luckily, Hazen stayed put.

Things in the rodeo arena are still going according to plan this year, but not at the pace they have in the past. After flying back to San Antonio for the Semifinals, Tim had a horrible ride where he came forward on the horse and slapped him with his free arm. Then the horse lost its footing and fell. Luckily, Tim was able to get his hand out of the rigging, and he escaped without serious injury. The next night was better and he earned a check, but it wasn’t enough for him to advance to the Finals.

He left San Antonio and went to Dallas to defend his title at RFD-TV’s The American. That didn’t go according to plan either when he finished in ninth place. After that, he did something that he can’t remember ever doing before – he took a whole week off.

“I got home and didn’t go to the gym,” he said. “I didn’t even open up my rigging bag or do anything with my gear. I just enjoyed a whole week getting ready for Hazen. It’s hard to live in the now when all you think about is the future. That’s something I’m working on.”

Enjoying the moments has put a fire back in Tim’s heart that reaches his mind and potentially all the way to his feet. The birth of his son is added incentive.

“I want to be known as a great father and husband,” he added. “I’m going to have to learn to not let work consume me and show him that in life you have to work for the things you want. It makes life worth living when you work hard and accomplish the things you really want. It’s important that I instill in him the same things my dad instilled in me.”

Tim and Hazen – Being a dad for the first time is life changing for Tim O’Connell.

The struggle is real. Balancing a family and a rodeo career goes way beyond what fans see in the arena. Rodeo contestants are some of the toughest people on the planet, and the most passionate. While Tim was competing at last year’s NFR, he got the flu. The Justin Sportsmedicine Team sent him to University Medical Center in Las Vegas where he spent the morning getting IV fluids so he could ride that night. That’s toughness and passion at its best.

Tim O’Connell is one of the most dedicated athletes I know. He always counts his blessings and never takes any of his success for granted. I’ve watched his work ethic pay off in the arena and seen what a loving and considerate husband he is. He and Sami are awesome examples of how to make a marriage and rodeo work together and when God picked parents for Hazen, He couldn’t have done any better.

I’m going to miss my conversations with Tim, but am excited to be following the Wrights, in particular, our current world champion saddle bronc rider, Ryder, his brother, Rusty, and dad, Cody, the rest of the year! Stay tuned, it’s likely to get WESTERN.