In 2018, the Professional Rodeo Cowboys Association sanctioned 644 rodeos. The majority of those are in rural communities and while the towns that they are hosted in might boast some great restaurants, places to stay and things to do, getting medical care for a traumatic injury can be a challenge.

Such is the case in Guymon, Oklahoma. Guymon is the largest town in the Oklahoma Panhandle with a population of just over 11,000. Their rodeo held the first week of May is the top event for the community and the list of other things to do is visit the No Man’s Land Museum. Guymon is the county seat of Texas County and is just 11 miles from Goodwell, home of Panhandle State University, which has a student population of around 1,000.

The University’s rodeo program is what first brought Canadian Clay Elliott to Oklahoma and when he competed at this year’s Pioneer Days Rodeo, he was very grateful for the connections he made in the close-knit community.

Elliott has qualified for the last three Wrangler National Finals Rodeos in saddle bronc riding. He also has two College National Finals Rodeo qualifications to his credit. He finished as the national champion in 2015 and the next year was back in Casper, Wyoming to defend his title but came up short.

When Elliott started school at Panhandle, he knew that it was an opportunity to continue honing his saddle bronc riding skills. He had big goals in mind, from qualifying for the CNFR and graduating with a bachelor’s degree to pursuing a career in the rodeo arena.

He joined the PRCA in 2014 while he was in college. He competed in as many rodeos as he could while keeping his education and college rodeo a priority until graduating in 2016. That was the first of three consecutive NFR qualifications.

After having a so-so winter in 2018, he was 26th in the world standings when he returned to his second home, the Oklahoma panhandle. He was excited to have the opportunity to get on Frontier Rodeo’s Delta Force, a 15-year-old gelding that the cowboys love. He is a big, strong bay that takes them to the pay window or plants them in the dirt. 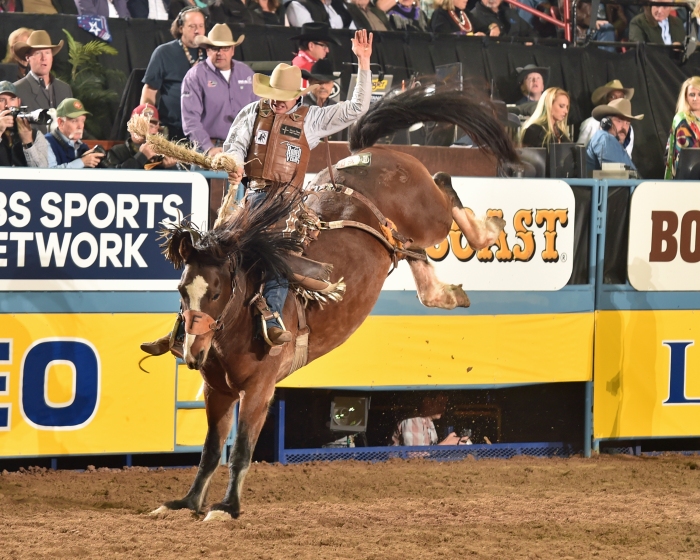 Clay Elliott rode Delta Force at the 2016 Wrangler National Finals Rodeo for an 83 and fifth place finish. The same horse sent him to the dirt at the Pioneer Days Rodeo in Guymon, Oklahoma in May. PRCA 📸 by Dan Hubbell

Elliott was familiar with the horse. He rode him in the 10th round of the 2016 NFR finishing fifth with an 83 and winning $6,769. He had a game plan that wasn’t any different from his usual one – nod your head, hold your feet (above the point of the horse’s shoulder for the first jump for the mark-out rule) and go for it. That’s exactly what he was doing. After a near-perfect mark out, Elliott was moving his feet fore and aft in perfect timing with Delta Force. Then, just before the eight seconds was up, he found himself air born and getting planted in the dirt. 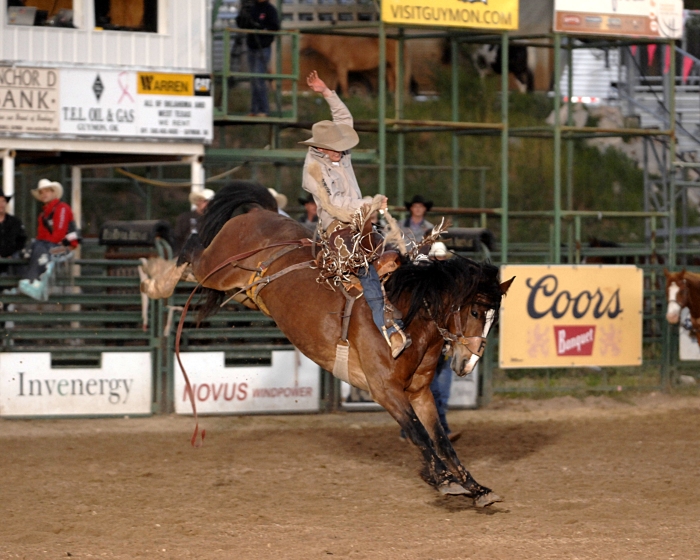 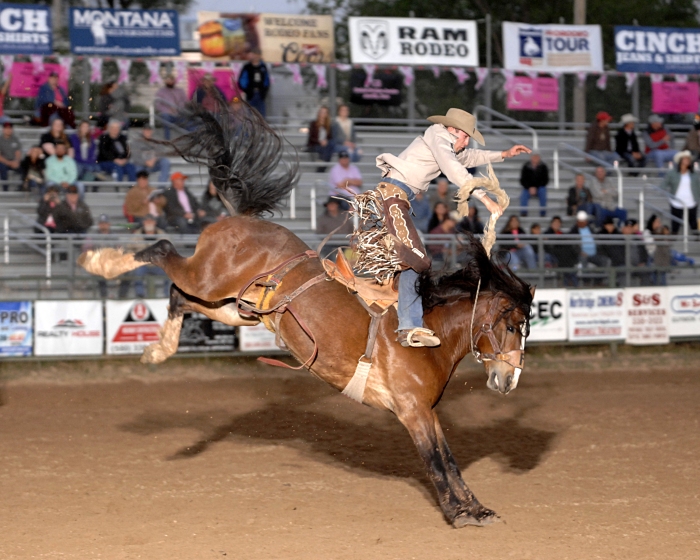 The beginning of the buck off – PRCA 📸 by Robby Freeman 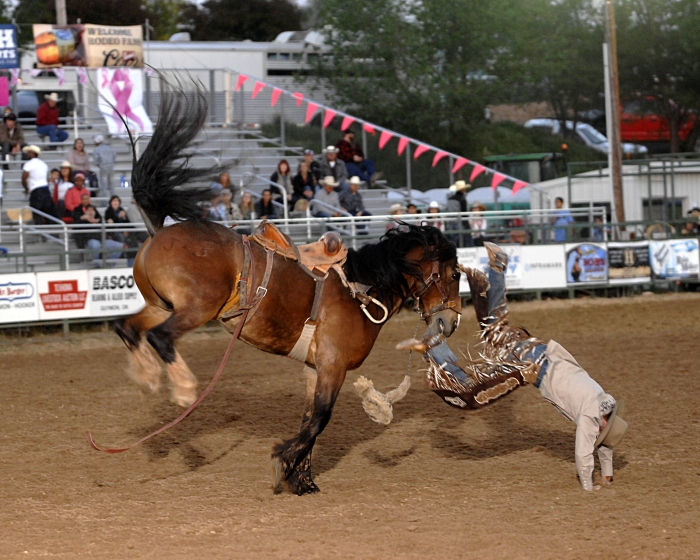 Diving into the dirt – PRCA 📸 by Robby Freeman

For the spectators, it looked like a typical buck off. Elliott had dived off the horse, hands and arms bracing for the fall. Then his head hit the dirt and his body followed. He was a little slow getting up, and the Justin Sportsmedicine Team (JST) hurried to the arena to check his status. Elliott kept assuring them that he was “okay” and with their assistance, walked out of the arena. 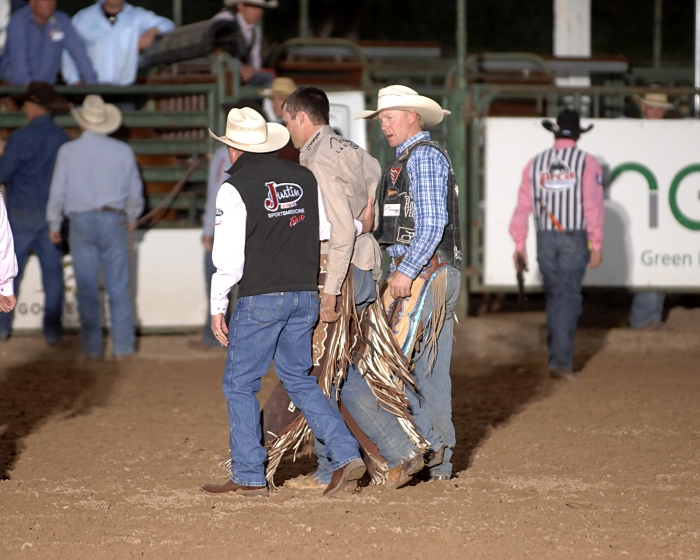 Clay accepted help from the Justin Sportsmedicine Team, to walk out of the arena. He didn’t know it at the time, but soon learned that he had three broken vertebra in his neck. –PRCA 📸 by Robby Freeman

First stop – the Justin Sportsmedicine trailer. If the team is at an outdoor rodeo, so is one of their mobile units. With medical supplies, a variety of training equipment and treatment tables, they are staffed with athletic trainers, physical therapists and doctors. Luckily for Elliott, they were at Guymon.

The team goes to at least 125 events each year with a traveling program manager taking the lead. They depend on volunteers to staff events. Not only do the volunteers help take care of the athletes, they also have ties to local medical communities, crucial in the event of a traumatic injury. Most program managers started as volunteers and along with their involvement with the Justin Sportsmedicine Team they also have other full-time jobs.

The team at the Henry C. Hitch Arena for Pioneer Days included program director Rick Foster, volunteers Ron and Robert Hulsey from Amarillo, Texas, and Dr. Emmanuel Barias. Dr. Barias, who practices family medicine in Guymon examined Elliott, and they immediately put a cervical collar on him and sent him to the hospital.

“We knew he was hurt,” Foster said. “As he started getting up, the first thing he did was take off his hat. That was our first clue. Then while he was moving in the trailer he said, ‘Something’s not right.’ He couldn’t hold his head up straight, so we also knew something wasn’t right.”

After an ambulance ride to Memorial Hospital of Texas County, he got the conformation that indeed, something was not right. X-rays showed multiple fractures in his neck. The staff at the 25-bed facility in Guymon immediately got to work. They contacted Foster to consult on the next step.

Normally, a patient would be flown to Amarillo, Texas, 121 miles away or Oklahoma City, 263 miles away. The weather didn’t look great for either of those places, so Foster asked if they could send him to Dallas (456 miles) or Denver (368 miles).

If they got Elliott to Dallas, he would have the benefit of the JST medical director, Dr. Tandy Freeman’s network and Freeman could oversee Elliott’s care. If they could get him to Denver, Dr. Steve Morgan, JST Director of Education could do the same. Weather was questionable to get to Dallas, it was also farther, so they arranged for Denver.

In Guymon, the hospital is now filled with other bronc riders and several members of the Etbauer family. Elliott’s girlfriend, Kaylin Snodgrass, who is studying to be a nurse in Lethbridge, Alberta, was also there. They used Apollo MedFlight for the transport, so it was back in an ambulance to the local airport where Elliott’s private jet awaited.

“It was like the Fourth of July, getting on a small plane to go to a rodeo,” Elliott said. Big difference – he was on a backboard strapped down instead of sitting in a seat. Snodgrass was on the plane with him.

Meanwhile, Dr. Morgan, who is an orthopedic trauma surgeon was busy making arrangements at Swedish Medical Center where he is on staff.  When they landed in Denver, Elliott found himself in an ambulance again, being transported to the hospital.

That was Friday night. His dad, Vern Elliott, who lives in Nanton, Alberta, was also trying to get to Denver. He got on a flight that got in just as Clay was taken to surgery. After Guymon, the 25-year-old bronc rider was heading home, so his van was still in Oklahoma.

Kasey Etbauer, Dan’s wife started making calls and hoping they could find a way to get the van to Denver. She found some people headed that way and it wasn’t long until it was waiting for passengers to head north.

Less than 24 hours after being bucked off a horse in Guymon, Oklahoma, on May 3rd, Clay Elliott had three ambulance rides, one trip in a private jet and a successful surgery. He got out of the hospital on May 7th, loaded in the van with Vern at the wheel to make the 1,000-mile trip home.  Vern drove straight through getting home Wednesday morning. 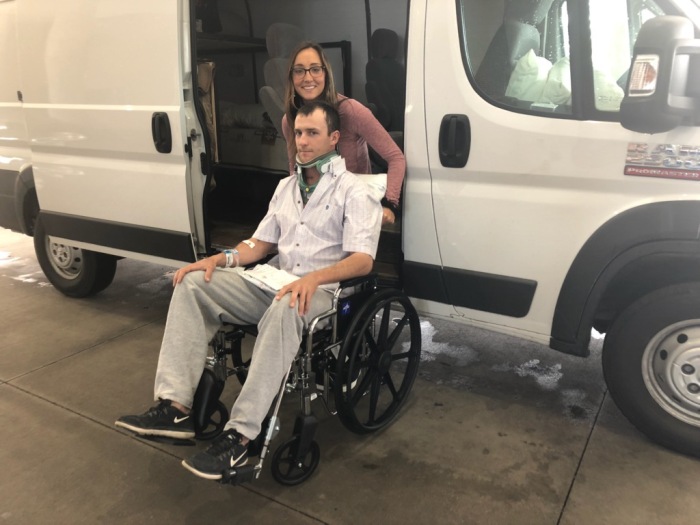 Clay getting in the van for the trip home.

“It wasn’t bad,” he said. “I spent most of the ride on the bed in the back. It wasn’t what I would prefer, but it could have been a lot worse.”

Foster communicated with some of his colleagues in Canada so Clay would have resources there too. He went to a local doctor on May 27th and was encouraged with the report that everything is still straight, and the healing process is going just as expected. He will be in the cervical collar for at least two more months and wait to see what the next step is.

“I’m going to take advantage of time at home,” Clay said. “In the fall, I will go to work on the Gang Ranch in British Columbia. When I can get on horseback, I plan on doing some guiding (hunting trips). There are a lot of things that I couldn’t do because of rodeo so now I have some different plans.”

The Justin Sportsmedicine Team played a critical role in Elliott’s diagnosis, treatment and will stay involved in his recovery. They have done the same thing for hundreds of contestants through their decades of involvement in rodeo.

“It’s wonderful that we have the network in place to deal with everyday injuries and then an emergency situation like Clay’s,” Foster said. “We rarely charge a contestant for anything due to Justin Boot’s financial support. Our network continues to grow so we can offer quality care from people that understand rodeo. It’s a huge asset to the committees and everyone involved in rodeo, not just the contestants. The Justin Sportsmedicine Team would appreciate it if everyone considered that when they buy a pair of boots.”